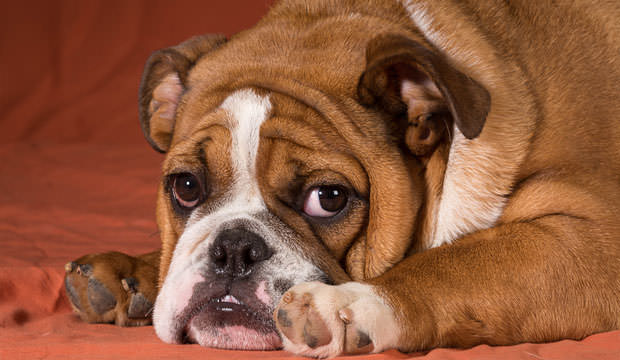 Photo credit: Bigstock
Are they just drama queens or are they really trying to convey a certain message when they sigh?

Groaning and sighing are pretty common dog sounds and they can express diverse emotions such as happiness and frustration.

It is important to learn what these signs mean and to know how to interpret their language in general.

If he starts groaning or sighing when you’re petting him, it is not a sign of discomfort. He’s are actually expressing his genuine delight.

When he’s groaning while you’re petting him, your dog is telling you that it feels great, and by making this sound he’s in fact encouraging you to keep it up.

Sighing can sometimes mean defeat. If your pooch was eyeballing some of your food while you were eating and he now realizes he’s not getting any, you might hear him groaning as a way of saying: ”Oh, well. Maybe next time.”

If you’ve been for a walk or had a session of playing fetch, your pooch is probably tired and needs to doze off a bit. Sighing in these situations is usually accompanied by other signs of pre-napping behavior such as stretching out.

“I’m not feeling that great.”

Groaning and sighing can sometimes mean health issues and discomfort, as well. You can mistake sighing for wheezing, which is a common indication of respiratory conditions such as chronic bronchitis.

If the sighing and groaning are too frequent and excessive, it could also mean your pooch is in pain and it is time to set up an appointment with the veterinarian.

Useful article. I had a guide dog named Thunder. Onetime I was at a health care government hearing with her. This state rep bloviated on and on. Thunder took in a GIGANTIC breath and let out the longest groan ever heard in the canine world.
The guy stopped. The room erupted in laughter. A senator muttered, “I agree with that dog.” I needed no interpreter to understand her meaning, and I, among many, agreed.