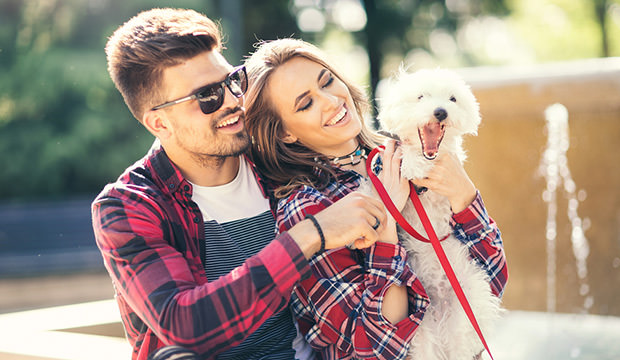 Smile at your dog more, as he knows what it means!

Whether it is a wagging of his tail or a subtle tilt of the head, dogs seem to be communicating with us and are pretty much able to sense exactly what we’re feeling.

As we already know, our pooches can read our subtle communicative behaviors, can read our eyes, and can also sense when something isn’t quite right with their owners, but several new studies provide further proof that our beloved canine friends can read our emotions and facial expressions.

The Difference Between A Happy And An Angry Human

One recent study published in the Current Biology journal found that canines are indeed able to tell the difference between happy and angry human facial expressions.

Corsin Müller, a biologist at the University of Veterinary Medicine in Vienna, Austria, along with his colleagues, conducted an experiment in which they tested 11 dogs (including border collies, a fox terrier, a golden retriever, a German shepherd, and some mutts) and trained these dogs to touch either a happy face or an angry face for a treat using a touchscreen.

The researchers presented the canines with either the top half or the bottom half of the faces, so they would know the dogs weren’t merely responding to a smile or the baring of teeth.

“Emotions show on all parts of a human face, not just the mouth,” says Müller. “If you’re angry, a wrinkle between the eyes shows up,” he adds. “The shape of the eyes can change too.”

This basically means that, if these dogs were truly able to differentiate between happy and angry emotions, they should be able to do so regardless of which part of the face they were looking at.

After the training of the dogs was over, Müller and colleagues ran them through choice trials, in which the canines had to pick between strange faces with either happy or angry expressions.

(Related: Dogs Can Help You Beat Depression, Anxiety, And Stress!)

It Was A Success

Just as the scientists suspected, the pooches trained to pick out happy expressions could do so rather quickly and consistently, and the canines trained to recognize angry faces were also able to pick out the angry expressions successfully, though it took them longer to learn their task than the dogs trained on happy faces.

And yet again, it was confirmed that our beloved furry friends like cheerful people more!