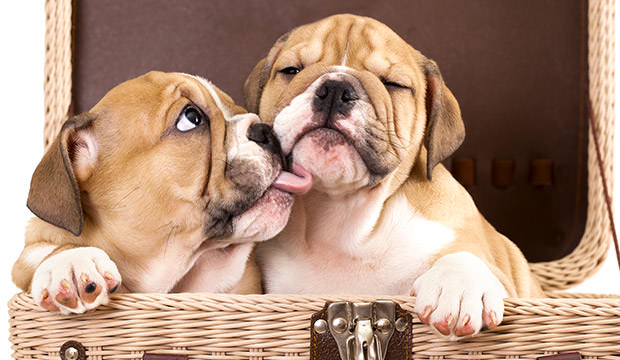 Just like with us humans, body language and the context in which certain actions are taking place are essential in determining their meanings and figuring out the intentions behind dog’s behavior.

When it comes to dogs licking each other’s mouth, the gesture can have several meanings, but they are all benevolent.

If you see your pooch nudging another dog’s mouth with his own in an action that very much resembles kissing, he is simply saying a happy and enthusiastic hello.

If the action turns into licking, that is a pretty strong indication that the little guys are on the same page, to say the least.

Licking can also mean that the licker thinks the other dog is his superior, and he feels defeated and vulnerable, so he may lick another dog’s mouth to show he admits inferiority.

If the other dog doesn’t exactly like what is going on at the moment, he might become hostile and start growling, barking or snarling.

This means that the feelings are unfortunately not mutual, and you should separate them immediately.

Oftentimes, licking is simply a pure sign of affection. Basically, it is plain old kissing, but a little bit sloppier, obviously.

According to The Peninsula Humane Society & SPCA, it can also be an invitation to play, and the translation would probably be I like you a lot, so let’s go play!

Our dogs either takes turns or one starts as the other stops. Interesting, huh?

Thank you for a great article. I completely agree with you about it being like kissing in some instances and often a sign of respectful submissive affection…….I work with lots of different dogs in an environment where they hang out, off leash and do there thing. I also live with 8 of them. I regularly host a Westie and a Spoodle who canoodle on the couch and they are definitely kissing, just gorgeous to watch (although sometimes it feels like I shouldn’t be hahaha). I must however, politely disagree with you on the following: “If the other dog doesn’t exactly… Read more »

I have a Beagle/Papillon and she is sometimes a little more expressive with bigger dogs. I think she’s worried that they may not realize their size and play too rough with her. So she can be a little gruff when a larger and hyper dog approaches her wanting to play. Sometimes the larger dog will respond by changing not being as hyper and in her face. This is the intended affect. My dog will then respond positively to that and then they will play. So I agree with Kim that a snarl or two isn’t necessarily bad. It can be… Read more »

I have 5 dogs, 4 labs and 1 german Shephard, My German SHephard is 3rd in the line of coming into the pack. But she is always licking the oldest the 14year olds mouth, Which of course she does not like AT ALL. my GSD will lick her when she just walks pass her, Or will just walk up to her and lick her mouth, or lick her mouth after she is done getting a drink of water, My Shephard does not do this to any of my other dogs only the oldest which is 14 years old. But my… Read more »

My Chihuahua mix & Shih Tzu mix always play together & frequently “kiss” each other. Not sure what’s going on, but it’s evident they are fond of each other & seem to be really good pals. I love it! 🙂