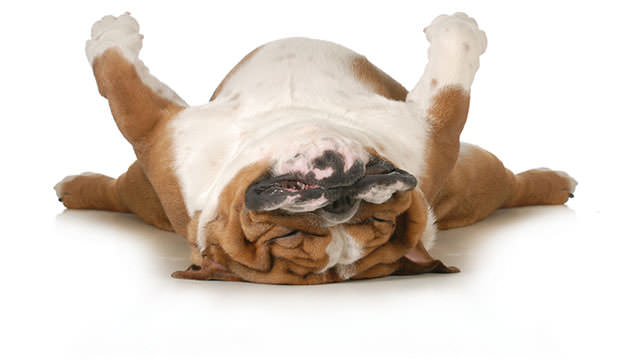 Photo credit: Bigstock
Generally, dogs like seeping. They spend a good bit of their free time sleeping or resting, thus they frequently change up their sleeping positions.

Just like us humans, they toss and turn and, while lying on their tummies, sides, or curled up are rather common positions, dogs really like belly-up position and sleeping on their backs.

Your pooch’s belly is more exposed since it doesn’t have as much fur as the rest of his body. Lying on his back while sleeping opens his tummy to the cooling air flow, and this way he is regulating his body temperature while asleep.

Dogs like to experiment with different positions when it comes to sleeping or resting. This way they relieve pressure points or simply change things up a bit so he wouldn’t feel bored.

Generally, they start out their naps on the side and later roll over to their backs. Often, you will see your pooch letting his legs dangle in the air or out to the sides. Dogs love this strange position simply because it’s comfortable.

On the other hand, this also means he feels safe and sound. Dogs who sleep on their backs expose their bellies, which is their most vulnerable area, to predators, so if you catch your ball of fur sleeping with all 4 legs up in the air, this means he feels secure.

Looking at my rescued Belgian malinois, sleeping on the sofa with his legs up and tummy exposed, makes me smile knowing he feels secure at last, sometimes insomnia makes you smile!