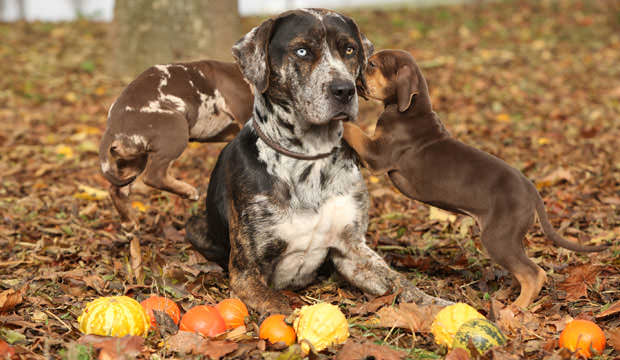 Besides having a name that is a mouthful to say, the Louisiana Catahoula Leopard dog is yet another true American bred dog ratified by the states. That is to say, the Catahoula Hound is a breed of dog known as a cur, or a mutt.

Ratified by Louisiana as the state dog in 1979, the breed is named for Catahoula Parish, where it got its start.

There are many different origin theories on where exactly the DNA for the Catahoula Cur comes from, but almost all agree on one point: these dogs are the descendants of Native American dogs bred with European dogs brought over with the colonists.

The word Catahoula also derives its name from the Native American language. One theory suggests it is the Choctaw translation for ‘beloved lake’, while the other theory claims it is the French version of the Choctaw’s own name for themselves, ‘Couthaougoula’.

The Catahoula is a very versatile working breed that comes in a variety of colors, thanks to its cur origins.

They are typically characterized as being between 20-26 inches tall and weighing between 40-90 pounds.

They have sleek fur that comes in a range of colors like blue, red, silver, gray, or a double or triple combination of such.

They are typically characterized as being loyal, intelligent, loving, yet insistent dogs. Many owners playfully joke about how their Catahoula owns them, but this is a good thing.

As a family dog, you can do none better. If a Catahoula is raised with children, it will believe it is his responsibility to look after and protect them. It will guard a house as an alert dog very well, yet at the same time be a loving center around which a family can bond.