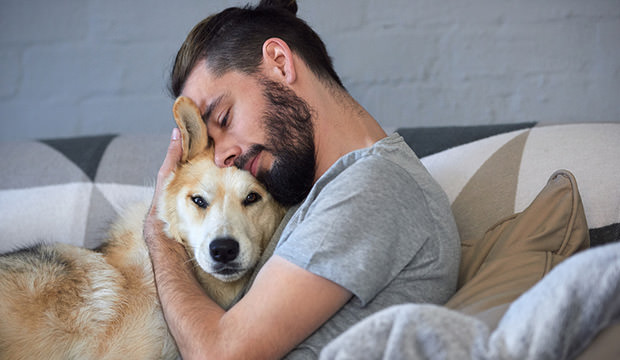 Dogs and humans have this invisible but unparalleled and genuine bond unlike any other two species on Earth. They love us unconditionally, harbor unending enthusiasm toward our presence, and show us loyalty no matter what.

Dog is simply man’s best friend, and for a reason.

This human-canine symbiosis and mutual understanding can be traced back to 32,000 years ago, and this strange relationship has evolved significantly over time. Newer studies have shown dogs can help us beat anxiety, depression and stress, while other findings show canines can also read our facial expressions and act accordingly.

However, these advances in canine evolution don’t have anything to do with wolves. Previous studies have proven that wolves, even when raised by humans, never become as close and as sociable with their owners as domestic dogs do.

So, what is it that made our canine friends so in tune with us humans?

It’s All In The Genes

It appears the answer lies in the genetic underpinnings, according to the new research published in the journal Science Advances.

Namely, the scientists at Princeton attempted to identify the genes behind what they call hyper-sociability, and conducted a study in which they examined canine DNA. The project led them to the conclusion that there were significant genetic differences between wolves and dogs. 48,000 of them, to be more precise.

Yes, they identified 48,000 mutations in dogs that wolves don’t have.

For his particular project, Biologist Bridgett VonHoldt of Princeton University joined forces with Monique Udell at Oregon State University, who’s been studying dog and human relationships for a long time, including how they bond and interact. They collected a number of blood samples from domesticated dogs and wolves, and examined the behavior of 10 wolves and 18 dogs raised side-by-side, by humans.

“VonHoldt and colleagues looked at the genomes of these animals and compared them,” writes Big Think. “They identified a segment of 28 genes that were way different in dogs than their wolf cousins. These genes are responsible for the canine iteration of what’s known in us Williams Syndrome, which causes overwhelming friendliness and affability.”

Jokes aside, the study found four types of genes that were responsible for this hyper-sociability in dogs, two if which (GTF2I and GTF2IRD1) were identified as direct drivers of this trait in other species as well.

Another everlasting debate is the question of: How exactly did dogs become domesticated?

The abovementioned team of scientists touched this subject as well by testing the genes of non-domesticated wolves and coyotes and their possible hyper-sociability. It turns out coyotes don’t have the genes responsible for hyper-sociability at all, while both dogs and wolves do.

Of course, in dogs these genes are highly expressed. Oh yes they are!

Ahem. If take a look at the big picture and a large enough time-frame, dogs benefited a lot from becoming man’s best friend. Their love and friendliness toward humans helped their survival and their evolution immensely. According to Brian Hare of Duke University, this is called the “self-domestication hypothesis” or “the survival of the friendliest.”