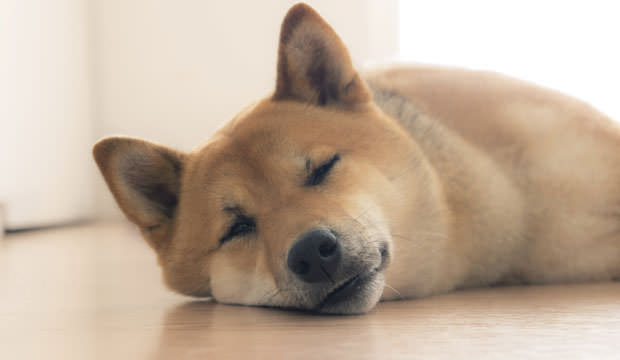 So, you got a new four-legged family member and you’ve noticed some weird things going on while your new canine friend is sleeping. Do not be alarmed.

Although these things can be an indicator that your dog is in pain or is having some other health issues in some situations, be assured that the probability is that everything is okay. Normal to the experienced dog owners and dogs themselves (unaware of the situation), some things your dog does while sleeping are just downright strange.

Here are the 9 shocking things dogs do in their sleep that stress out new dog owners.

However it may sound strange, brainwave patterns of sleeping dogs and people are pretty much the same.

Dogs pass through the same series of sleep cycles as humans.

They also have vivid dreams occurring during the REM (rapid eye movement) stage, which, according to some experts, may vary from the size of your pet.

Allegedly, the frequency of REM cycles occur depends upon the size of your dog: small dogs may have dreams every 10 minutes but large dogs have fewer dreams that last longer. This is when your dog’s legs start twitching and his eyes darting around behind closed lids.

Relax, everything’s fine. All mammals dream and when they enter REM sleep, a section of the brain stem kicks in to partially paralyze their muscles. Thankfully, this prevents them from physically acting out their dreams. Shivering is no cause for alarm. 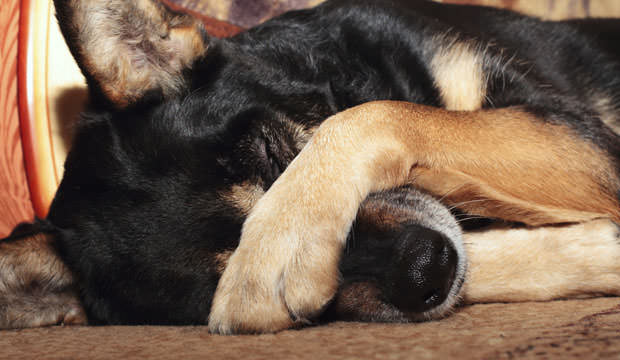 However this stage may be deep, it’s the one in which you pet becomes active.

It’s important to remember not to wake your dog up when they cry in their sleep, no matter how tempting it may be or how worried and sad you may be.

REM sleep is an indication of healthy brain growth, and it will occur less and less as your pup grows older. Nightmares are a beneficial thing actually, because they serve to help us avoid dangerous situations during the day and help us get rid of our fears, at least partially. Dogs are no strangers to this. 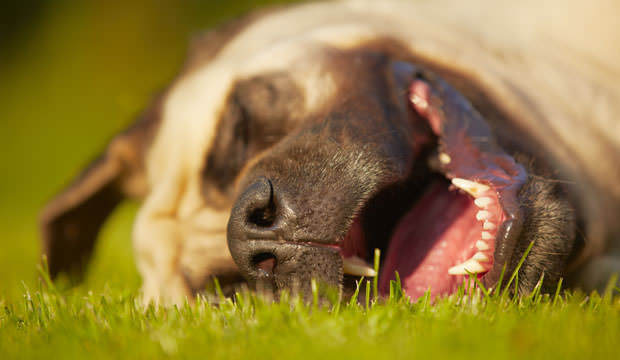 Photo credit: Bigstock
This one may be the most annoying one for the dog owner.

Your beloved pet is just dreaming, and sure, it may be a bad dream but it also may be a good one.

Not all barks are bad; remember that that’s the way canines communicate, among other ways.

Sure, your pup may be dreaming about defending from a vicious predator but it also may be dreaming of nice things like play time with other dogs, chasing birds and greeting you at the mere glimpse of your silhouette down the street. Like in most cases, just let your dog dream, the barking (although annoying) will stop shortly. 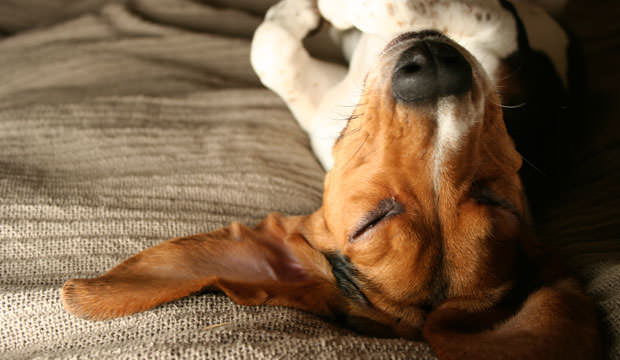 Like in the SWS stage of sleep, when dogs breathe heavily, the REM stage also has particular movements to it. In this stage your four-legged friends act on their dreams by twitching or moving all four paws.

Dogs that stretch out when they sleep are more relaxed than those who sleep all curled up, so they are more prone to twitching in their sleep.

Twitching in their sleep can be funny and cute to the owner, but also stressful if the owner doesn’t know what’s going on. Your lovely family member is probably dreaming of running freely and having fun, so there’s no need for worry. It has been noticed that young puppies and senior dogs tend to move more in their sleep and to dream more than adult dogs, for reasons yet unknown. 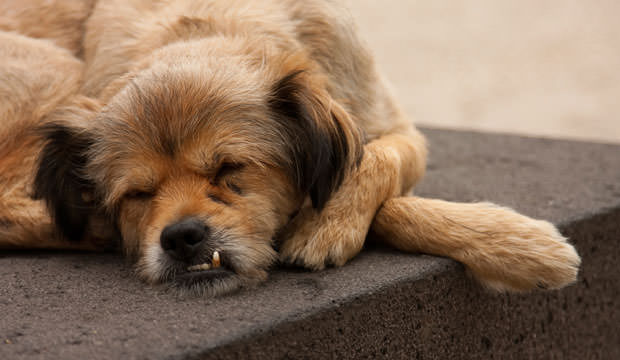 Photo credit: Thinkstock
This occurrence is not as annoying as barking, because it’s not as loud, but it’s not the most pleasant of all “dog dreams” side effects.

Although most people understandably associate a growling dog with an aggressive dog, this doesn’t have to be the case.

Sure, growling can be an “unmistakable warning sign” that tells other beings to “back off,” but canine specimens can also growl when they’re frightened or defensive and they also often engage in play-growling.

Do not be afraid that your pooch has an alter-ego developing in their sleep. Everything’s a-okay. 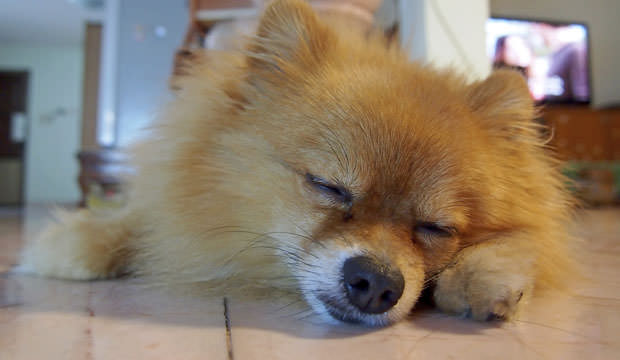 Photo credit: Thinkstock
Shaking takes a bit more serious note. There are many possible reasons of your beloved canine shaking in their sleep.

These reasons can range from completely normal dream state to a serious, life threatening condition.

If you think that your pooch has the case of the later, take him or her to the vet.

The mere sight of your beloved dog shake during his or her sleep is disturbing for the dog owner, and mostly because they are unsure of what is causing it and whether or not the dog is in pain. The safest way to find out of course is to get a checkup.

There are several health conditions that cause a dog to shake during sleep: the non-alarming Rapid Eye Movement (REM), and the health-regarding Epileptic Seizures and Ballistocardiogenic Tremor.

When it comes to our four-legged friends, they happen because of bad dreams, and they are totally normal.

However, if they get really bad, you should consult your vet.

You should also take a moment to think did you feed your dog anything new lately, and has he or she been eating before bedtime? If the answers are “yes,” then take the food into consideration as a reason for the muscle spasms. It’s maybe what they’re eating that is causing the nightmares. If it can happen to humans, it can happen to dogs, but check with the vet to be on the safe side. 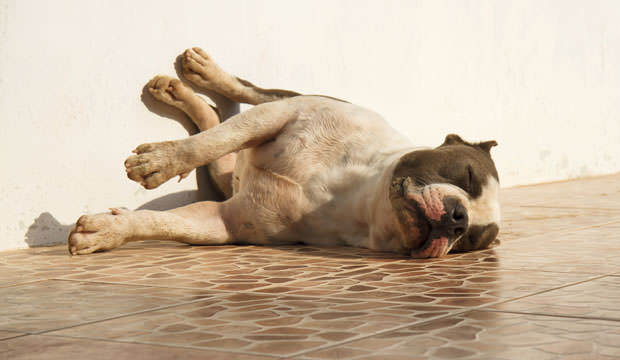 Photo credit: Thinkstock
Kicking is a side-effect of your dog’s dreams.

During a dream, the brain cuts the connection to the parts that control movements in order to stop the dreamer from physically acting out the dreams, and thus quite possibly, keeping the body safe.

But of course, that disconnection isn’t perfect. It’s the same things with dogs as it is with humans.

You probably noticed that your very own legs twitch as you start to dream. Dogs also have the same mechanism, so a kick or two are not alarming, despite the fact that they may seem strange and shocking to the watchful human eye.

However, if the movements get excessive and a lot more aggressive than before, maybe your dog’s disconnect mechanism is faltering or maybe he’s just getting more deep sleep and dreaming more. If your pet is getting hurt in the process, consult a vet. 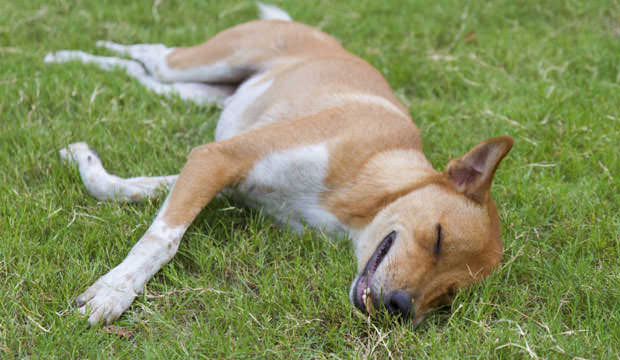 Photo credit: Thinkstock
The most shocking and unusual of all doggy things regarding sleep, sleep running is the most normal one of them all.

It is important for the owner to restrain himself or herself from waking the dog up, because it can cause a slight chaotic moment in the pet’s brain.

Sleep running is a perfectly normal thing dogs do while in the REM stage of sleep.

Your dog is running freely in the safety of his or her own mind, and there is no need to be alarmed. It’s just the case of the above mentioned “disconnection.” Owners who have more experience with dogs love this sort of thing so typical for dogs, because it’s usually a really funny, cute experience. Of course, try not to laugh so loudly, so your beloved pooch won’t get an unpleasant, distressing wake-up call.