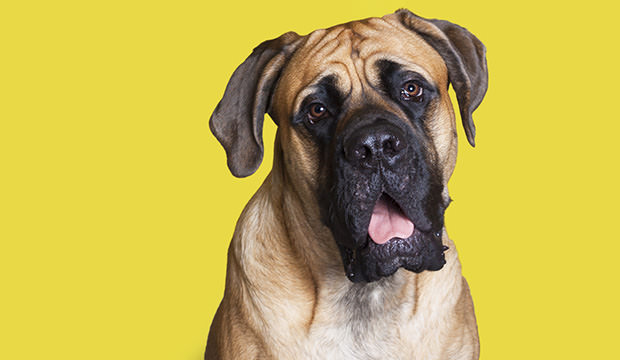 If you are looking for a large dog that will scare off unwanted people, but cuddly enough to be great with kids, look no further, for English Mastiff might just be the breed for you.

The English Mastiff, or sometimes referred to simply as the Mastiff, is a breed of large dog which is believed to had descended from the ancient Alaunt and Pugnaces Britanniae, with a significant input from the Alpine Mastiff in the 19th century.

The lineage of a modern dog dates back to the beginning of 19th century, while the modern type was stabilized during the 1880s and has been refining ever since. The interesting fact is that the Mastiff has contributed to the development of a number of dog breeds, most generally known as Mastiff-type dogs.

Quite the trailblazer of its kind.

These bad boys have massive bodies and generally broad heads of square-like appearance, which make them the largest dog breed in terms of mass.

The body is quite large with great depth and breadth, especially between the forelegs, causing these to be set wide apart and therefore establish a determined and scary looks.

When it comes to coat color standards, their standard fur should be short and close-lying and the color is apricot-fawn, silver-fawn, fawn, or dark fawn-brindle, always with a distinctive black muzzle, ears, nose and around the eyes.

Should I adopt/buy the English Mastiff?

So, if you like this beautiful combination of grandeur and good nature, courage and dignity, and also like huge dogs which are great with the little ones, the English Mastiff is the right pooch for you.