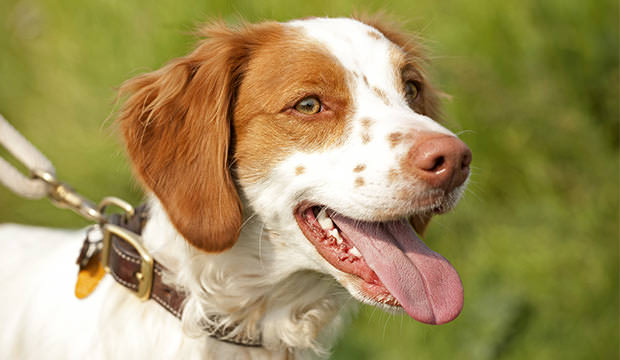 If you like happy, agile, attentive medium sized dogs, and you also happen to agree with Frank Sinatra about orange being the happiest color, French Brittany is definitely the right breed for you.

These cuties were developed in the province of Brittany in France between the 17th and 19th century, and the breed became officially recognized during the beginning of the 20th century.

Being ‘gun dog bred,’ they are primarily used for bird hunting, and even though they are often referred to as Spaniels, the breed’s working characteristics are more similar to those of a pointer or setter.

These medium-sized pooches are typically quite athletic, compact, energetic, and solidly built without being heavy. Their heads are of average size with floppy ears, and their muzzles usually express intelligence, vigor, and alertness, while their gait is elastic, long, and free.

These balls of fur are one of the most adaptable, intelligent, happy and attentive breeds out there. Their average life span is 13 years, but some of them can even be by your side for 15 playful years. They are especially beneficial if you are a professional hunter, as French Brittany dogs are well-balanced, strongly-built, agile, athletic and capable of great stamina in the field.

The breed is generally more sensitive to correction than other hunters, and harsh corrections are often unnecessary, however, they can become very shy if not thoroughly socialized at a young age, and even among well-socialized dogs there is significant variation in levels of friendliness.

So, if you don’t have enough time to play and seek adventure with your pet, French Brittany perhaps isn’t the breed for you.